The purpose of this document is to give a basic overview of the simulator, common questions and
demonstrate use of multiple simultaneous simulations with multiple simulators.
And fundamental high load testing plus the use of TCAP FSM and ISUP FSM simultaneously.

Q: What is FSM and what is the difference between FSM and scripts?
A: Answer: FSM (finite state machine) is code that handles TCAP, ISUP and IUP dialogs. Files with
extension fsm are scripts used by the TCAP FSM - while a script (with extension txt is script
used by the simulator. - see picture below for a functional view of the simulator functions: 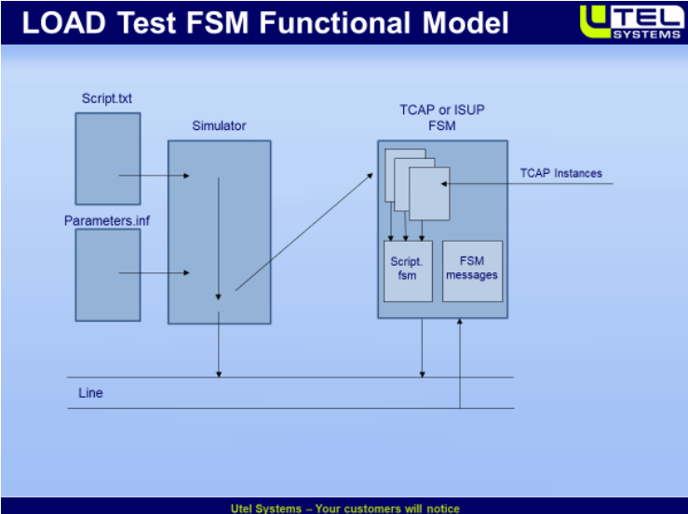 Q:How to create an fsm script?
A: this can be done the same way as an ordinary script, but must be saved with extension
fsm. Any text editor can be used. Notepad is ok.

Q:What is Trigger and how to create and use?
A:A trigger is an event that trigger a specific action, it is a script command for the TCAP FSM.
(see examples in the Special Examples: Delayed Triggers and Delayed Triggers with Charging
Report both examples have a document in the doc directory that explain triggers)

Q: What is the action needed to create a given flow of messages? (i.e. how to implement a test scenario)
A: We differentiate between functional testing and the use of FSM system. Functional testing can be done with a simple script using basic “tx” and “rx” commands, or it can be used in combination with auto answer. Auto answer is a file system that triggers specific script by a specified set condition (example can be seen in the Learning demo: MAP SMS MT).

Use of the TCAP FSM system: The TCAP FSM system gives the possibility to filter out separate calls and provide load testing. All examples are build using the same directory template. See picture below. 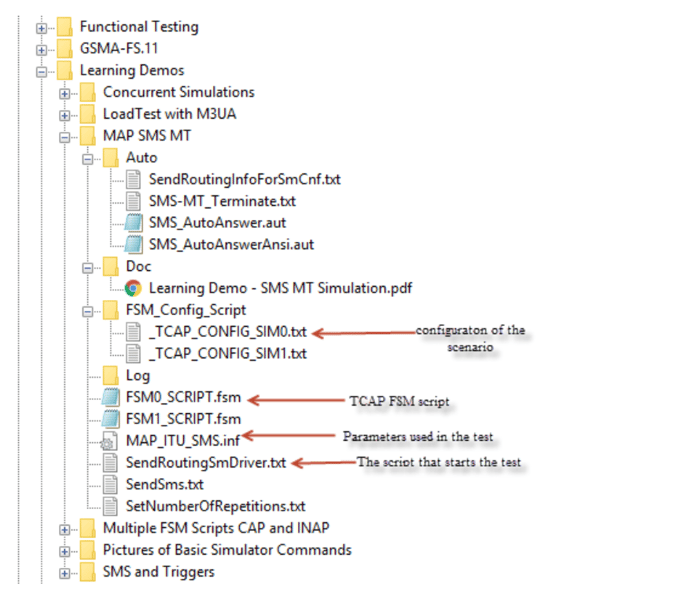 The picture above is taken from the Learning demo: MAP SMS MT, but any call flow should
be built with the same template as shown here. The basic components are : 1. The
_TCAP_CONFIG file that contains the loading of the required files and the commands to both
the simulator and the FSM system. The FSMO_SCRIPT.fsm is the script read by the FSM
system, the MAP_ITU_SMS.inf file (loaded from the config file) contains the parameters
needed in the test scenario. The SendRoutingSmDriver.txt is the script used by the simulator, it starts the test — i.e. at least send the first message. It is recommended to go through this
example.

The simulator contains a lot of examples that can be taken as a start point — find one that is close to
what you need and modify it to meet your requirements.

A: The dialog FSM settings is reached from “Simulator->(fsm) State Machines->settings. See
picture below:

The values can be set into the dialog. You can also set the timer dialogs by commands
launched by a _TCAP_CFG script - see the file _TCAP_CFG_commands.txt. If you have a
scenario where no delays are required you can turn the poll timer off with the cmd: “set
polltimer tcap off”.

Q:How to make a scenario that is a load test over a long time?

A: This is achieved by using the TCAP fsm script to launch a new call when the TCAP fsm file
receives an TCAP END message for a call. See the file: FSMO_SRI_loadtest.fsm (in the current
example i.e. this example)

Q:What is the difference between TCAP FSM and ISUP FSM?

A: The ISUP FSM is a state machine that implement the rigid ISUP specification. While the
TCAP FSM is a flexible TCAP state machine that reads fsm script made by the user. The
flexibility of the TCAP FSM system makes it a tool for the higher layer protocols like MAP
CAMEL INAP (CS1 CS2 etc.) CS1+Alcatel, CS1+Ericsson and ASE-RI.

A: Yes -and this can be used to provide scenarios that involves both TCAP and ISUP.
You need to route received messages to the ISUP and TCAP FSM modules. this is done by
turning the ISUP and FSM to ON. (an example is done later in this tutorial)

Q: What is Display Modes?

A: There are 3 different display modes. 1. The ordinary one picks up the messages from
ethernet. (that is below SCTP) 2. Monitor over SCTP — the messages are picked up above SCTP
— this reduces the load between the simulator agent and the simulator GUI since all the SCTP
acks not are forwarded to GUI. 3. Load test Display. With Load test display only information
about the traffic is sent to GUI - this is used with load tests that requires high call rate (since
a message is sent up to GUI for every 1000 calls there is s a substantial reduction in resources
used between GUI and agent which benefits the call rate possible.

Q: How do | set the range of numbers | can use in a test into an acronym containing the number.

Q: how do | copy information from incoming messages?

A: you can store parts of the incoming message to internal message boxes by the simulator
command: “loadmsgbox <boxnr> <filter to specify the part you want>” here is an example:
“loadmsgbox 0 tcap 22|04|03|05;” will find the operation 22 within tcap the search for the
tag 04 then 03 is the byte offset with in the 04 parameter 05 is the number of bytes to copy
into the message box 0.(then the bytes in the box can be copied to any parameter by the
command “modifyinfoel <acronymname>|<byte offset within this acronym> <boxnr>;”
(modifyinfoel conRNR|4 0; will copy the content in message box 0 to the acronym cpnRNR
starting at bytenr 4 in the conRNR parameter.)

Q: How do | control the CIC values in a load test?

Demonstrated in This demo

We have picked out two scenarios for this demo:

The Basic scenario for both SRI and SRI_ForSM. 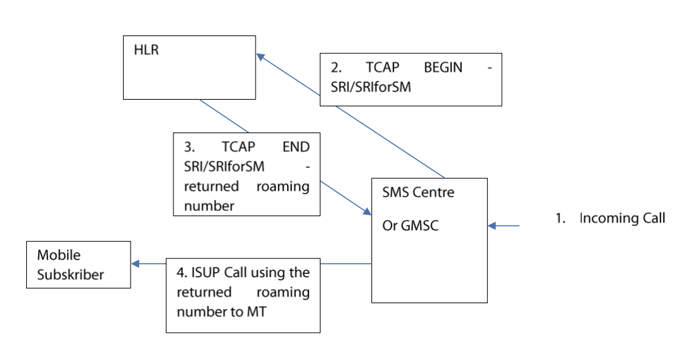 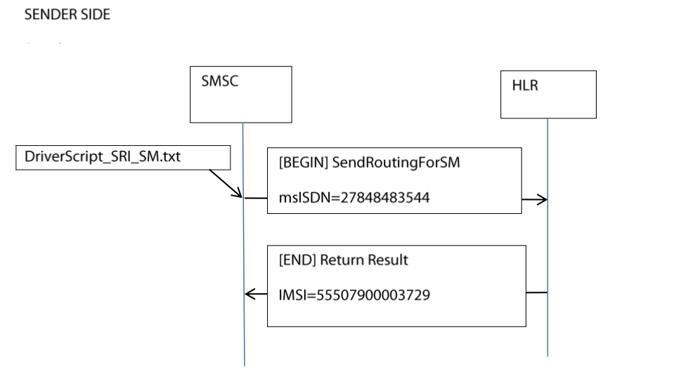 The returned number from HLR are different:

For SRI it’s a msisdn number and for SRI for SM it’s an IMSI number to be used by VLR. 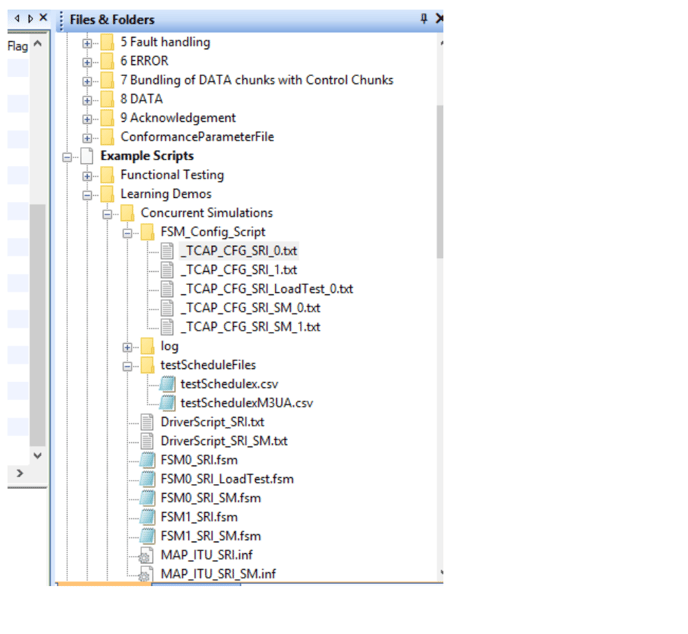 In the latter example the _TCAP_CFG files was loaded manually script by script and this was
the case also when starting driver scripts in simulator 1 and simulator 2. The call generator
manages multiple simulators in addition to synchronize scripts to start at a given time.

Note the same scripts as used for the TDM can be used for all carrier protocols.

But for simplicity we will only use two m3ua simulators in the following.

Since the setup now includes only two simulators on each pc the file used by call generator dialog
are slightly changed.

But still when the load is high a substantial part of the resources is used to forward messages from the simulator agent to the simulator GUI.

Choosing the mode “load Test Display” will remove the time spent to forward messages to GUI - and hence increase the load possible.

When this mode is on there is no messages sent up to GUI — instead information is set up for every 10.000 TCAP END message received — giving information about the call rate and the number of active calls. See picture below:

Do the following:
1. With the two active simulators — clear all windows in all windows.
2. On the SGP pc select monitor over SCTP
3. On the ASP PC select “load test Display”
4. Execute \FSM-Config_Script\_TCAP_CFG_SRI_Loadtest_0.txt
5. Open the Driver Script: Driverscript_SRI.txt and put # before the command: #pause 2000;
6. Activate the DriverScript_SRI.txt
7. Observe the result. it should be similar to the picture above. 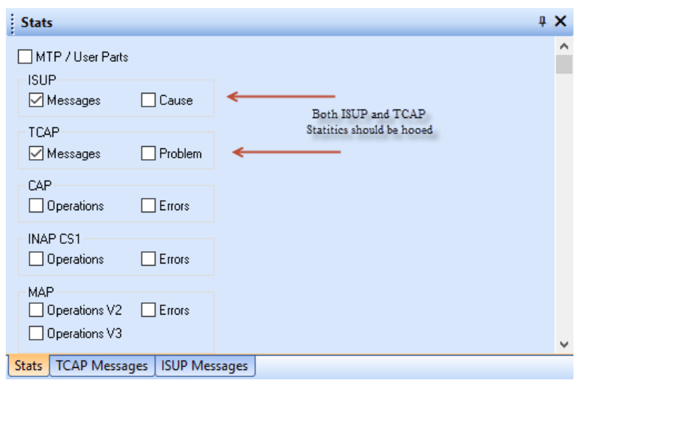 If the above is set before the test is run and the windows are cleared then the results can be viewed
in the respective stat panes: 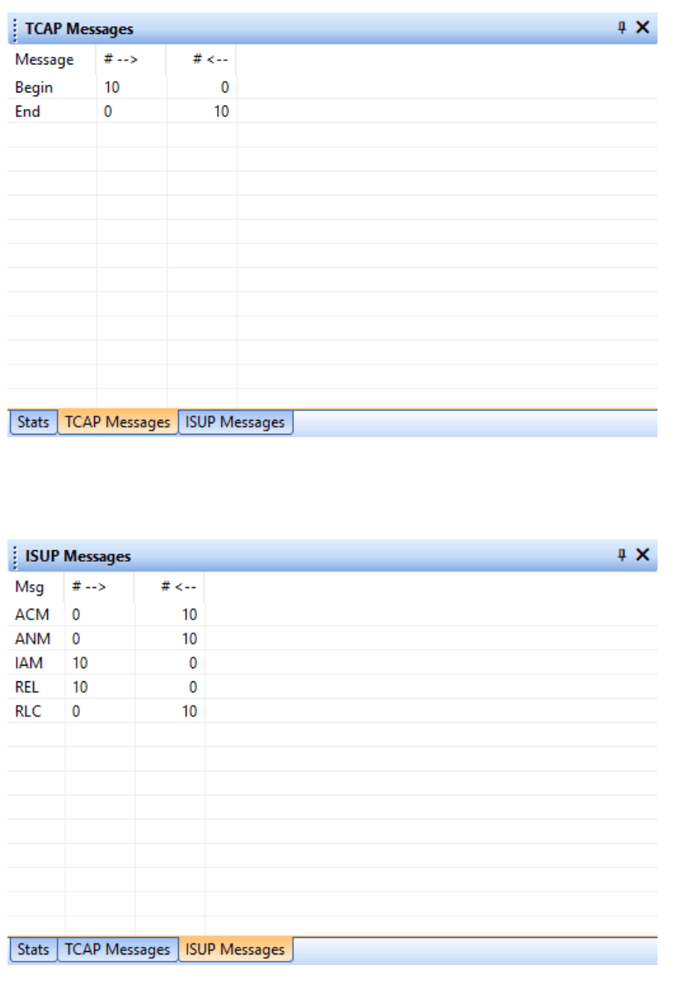 Explanation of the 3 Important Files:

This file contains all the setting you need to carry out the test. It also provides the memory of the
settings when the same test is needed to be rerun sometime in the future.